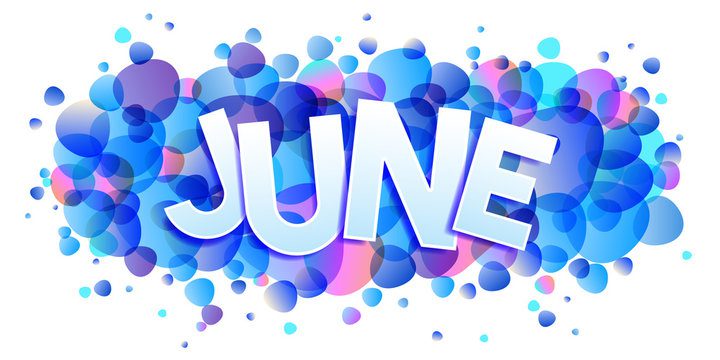 Even after almost 30 years of visiting incarcerated youth, Jake’s story was shocking to me.  He was…

One day when he was 9, Jake was called to the principal’s office.  He was shocked to see his mother, who said she was taking him to live with her in Missouri.  Confused and anxious, Jake got his things, said goodbye to his friends, and they left immediately.

By 11, Jake was regularly using drugs, got involved with gangs, and lived a dangerous life that he’s surprised he survived.  At 13, he was involved in a car accident (as the driver) that shattered the bodies of two of his friends, took the life of an unborn child, and left Jake in a wheelchair for a long period of time.  As a result of guilt and depression stemming from the accident, Jake attempted suicide on multiple occasions.  His older brother intervened and for a short period of time, Jake found sobriety

At age 14, dad re-entered his life after (and this was news to Jake) being released from prison.  Dad moved Jake back to Arkansas and soon, Jake resumed his bad behavior.  He was arrested and given the choice – spend the next 3-5 years incarcerated or find a healthier living environment out of state.

The judge approved for Jake to live with his dad’s mom in Oregon and he moved here in 2021.  Unfortunately, grandma’s own unhealthy lifestyle issues collided with his own and she kicked him out. After spending multiple nights under the bleachers at one of our local campuses, school and DHS officials intervened. His current life patterns continued and he eventually ended up at juvenile detention.

Jake has been in and out of danger, foster care, treatment facilities, and finally the juvenile detention center where we met.  At 16, he is finally ready to change and start the process of reunification with his mom who has been clean and sober for the last six months!  Meanwhile, Jake knows that he has his own work, and his next stop is a rehabilitation facility

Jake knows he shouldn’t be alive today but believes God has a purpose for his life.  Jake asked if he could add me to his call list when he goes to rehab.  “Absolutely”, I said. We prayed, I gave him a bible, and I’m asking you to join me in praying for his perseverance, his mother’s efforts toward their reunification, and this family’s healing. If all goes well, Jake could be home by Thanksgiving.

P.S.  Our new fiscal year begins July 01, 2022, would you consider donating $20 a month for a year to help us with continued ministry but also provide funds so we can start ministry at new locations?  Click the GIVE button below to set up your account online at a safe and secure location.  THANKS! 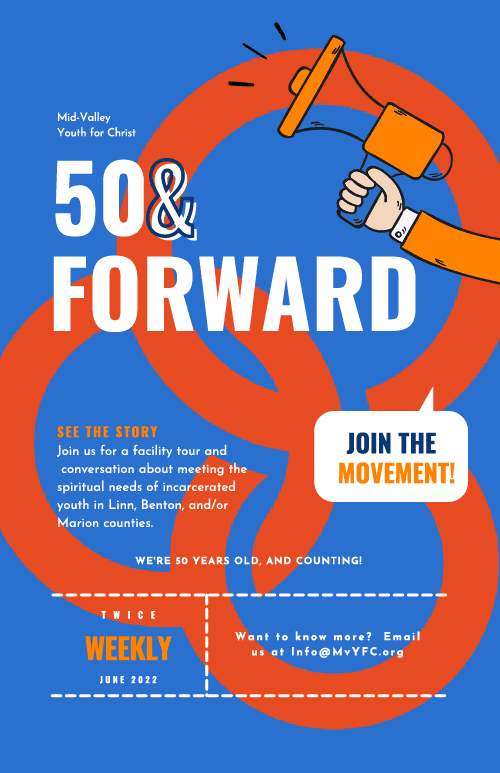 Celebrate with us 50 years of ministry in the Mid-Willamette Valley and hear about how you can help move us into the next 50 years.

Here at Mid-Valley Youth for Christ, we are committed to our mission of “Bringing HOPE to the hopeless.”  But HOPE is more than just a feeling we want to impart to the youth we serve, it’s a description of our organizational values, and a roadmap for our future.

As you may recall, HOPE is an acronym representing our four chapter values:

Last month I shared that Jen and I conducted interviews with facility managers to make sure that as we plan for the future, we don’t inadvertently organize ourselves around our dreams more so than their needs.  We want our ministry efforts to be truly helpful and during these conversations, we were more than assured about the relevance of what we have to offer!

This month I want to share a little about obedience because although it’s listed second in our values, it’s actually central to our desires.  The spiritual disciples exercises we practiced this last spring were invigorating, centering, and reminded us that obedience begins with humility – of orienting our actions around Christ’s desires.  Our actions towards others need to demonstrate relational humility (Phil 2:1-4) and our work efforts need to reflect an understanding that we have been designed to fulfill God’s plans (Eph 2:10).  And in Luke 6:43-45, we are advised that the proof of our humility will be revealed because “Each tree is recognized by its own fruit.”

Obedience to Christ is not about blind followership, but it does require making the choice to yield and set ourselves and our ambitions to the side.  Don’t get me wrong, we are ambitious regarding the future of Mid-Valley Youth for Christ!  But it’s easy to confuse personal and ministry ambitions and so we want to be both prayerful and bold as we take these next steps.

Would you consider taking a closer look at what we’re doing and where we’re headed?  We’d love for you to be a central part to our accountability and support.  Our 50 & Forward events are a great opportunity for you to “come and see.”   We have multiple dates and times listed on our website – check out the details at http://www.mvyfc.org under the tab GET INVOLVED. 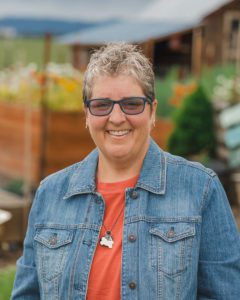 Bringing Hope to the Hopeless

Want to receive our newsletter directly to your inbox use the signup form on the right side of the page.

Thank you for choosing to support Mid-Valley Youth for Christ/Juvenile Justice Ministries as we bring the message of hope to incarcerated youth. We appreciate your commitment to this ministry. We believe a long-term, trusting relationship is the best means of bringing hope to a young person and the best conduit for the life-changing message of Jesus Christ. Our mission is with the least and the lost: those experiencing relational poverty, some form of substance abuse, and many other daily struggles. Again, thank you for being a part of the MVYFC team, you are helping make a difference in the lives of young people!

*** If the donation form below does not appear, please check to make sure you have cookies allowed and are not using incognito mode. Then refresh this page and check again. If you continue to experience issues, then please reach out so we can assist. You can call us at 503-559-1005 or email us at support@mvyfc.org

We use cookies to ensure that we give you the best experience on our website. If you continue to use this site we will assume that you are happy with it.AcceptPrivacy Policy